The Fallacy Of Moral Set Equivalence 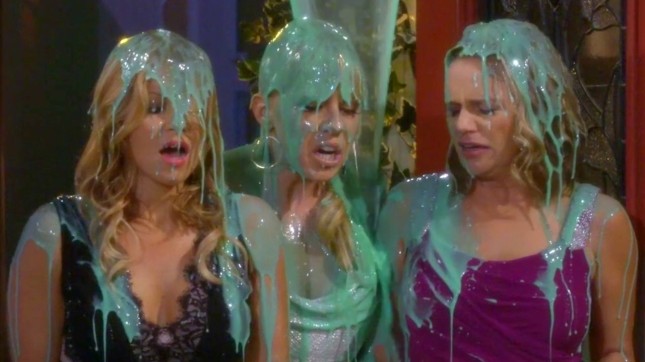 Human morality is a strange thing, once you step back and try to examine it logically. The very act of saying one should do this will trigger alarms in your System 1 / feeling of certainty. Alarms you have no control over, they just happen to you: What? You can’t use science and logic on morality! That’s wrong!

But it is still strange. We create moral categories (again, completely out of our conscious control) where clusters of behaviors are arranged in free associations and no underlying logic. This leads to things like moral equivalencies and moral pollution, which are inimical to actual logical thought. Yet these equivalencies and contaminations just feel right. Let me throw out an example.

A lot of people consider homosexuality to be immoral. Because of this, it gets placed in the moral set that might be called something like “sexual deviance”, where other immoral sex acts reside in the moral mind. Due to our moral free associations, almost any item in the “sexual deviancy” set can be equivocated with any other item in that set. So you end up with the strange logic of gay people also being pedophiles. The moral logic goes: Homosexuality is sexual immorality. Pedophilia is sexual immorality. Therefore homosexuals are also pedophiles.

Hopefully I don’t have to reiterate that this makes no logical sense. But this made intuitive sense for centuries! It’s only recently that a lot of people are starting to see that this is mistaken. Unfortunately, these people don’t understand why it’s actually mistaken; they’ve just removed homosexuality from the “sexual deviance” moral set, and continue equivocating between other immoral sexual behavior. Can you think of other sexually questionable behavior that gets equivocated with pedophilia like homosexuality used to be? That’s a hard ask, because you probably don’t even realize you’re doing the equivocating. Such is the nature of morality, unconscious bias, and our lack of free will.

There are so many examples of these moral equivalencies / pollutions. Let’s say I make an analogical argument: The communications protocol TCP behaves like a phone call between two people, and the communications protocol UDP is like sending snail mail. Someone objects to this analogy and says it’s invalid because computer communication protocols are not morally equivalent to human communication. This would be a nonsensical objection, right? But the same sort of thing happens in many political debates: 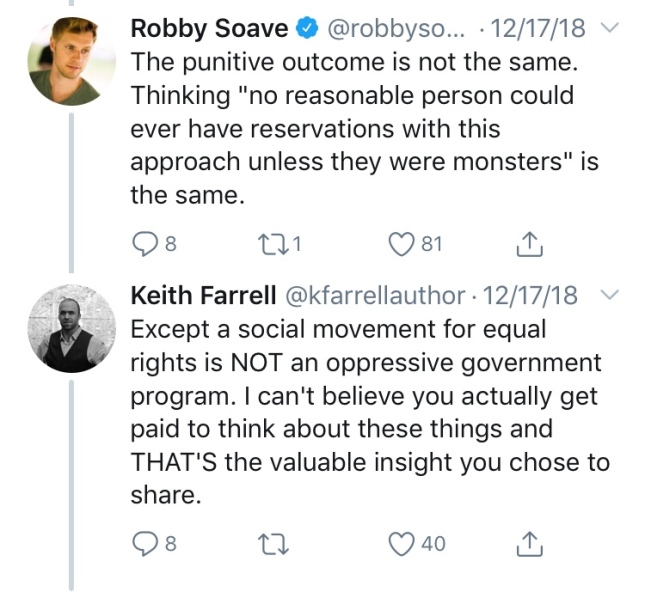 Dude on the bottom made a moral objection to an analogical argument. Of course a movement for equal rights is not morally equivalent to an oppressive government program. The very wording he chose makes that perfectly clear. Yet they can still be analogically equal and lead to the same analogical outcomes, as the first dude wrote.

If you have a knee-jerk rejection to some argument, you really should try to disentangle whether your rejection is a moral one or a logical one. And also take note that moral/intuitive thinking inhibits mechanical/logical reasoning. The more you do of one, the harder it is to switch to the other! And this is what makes almost all moral theories incompatible with science, just like belief in god.

Belief in god is about how the universe is set up morally, not physically, and almost all moral theories fail if you apply the scientific method to them.

The issue is that the human brain mixes up moral truths with physical truths. Belief in god is what happens when you apply rules governing social behavior (morality) to the universe. The scientific method is incompatible with that line of reasoning. Indeed, applying the scientific method to human beings is where we see the most conflict with various moral theories, including religion.

Comments Off on The Fallacy Of Moral Set Equivalence

Posted by J. Quinton on January 9, 2019 in cognitive science, morality