Neutralizing the Effect of Political Worldviews by Communicating Scientific Agreement: A Thought-Listing Study

Comments Off on When Science And Politics Disagree, People View Scientists Unfavorably

How do you explain the mysterious beauty of this planet without referring to a supreme being?

I’m from NYC. This question would be the equivalent of me saying “how do you explain that I was born in the most awesome city on the planet without a supreme being?”

Of course, almost everyone says their home town is the best ever. Why do you think that is? I think the answer to that is the same as the answer to your question.

But let’s get a bit deeper into the assumptions behind your question. What’s your logical link from “Earth is beautiful” to “therefore a supreme being”? In other words, what makes something a good explanation?

If I were to say that something is a chair, there are qualities that chairs have in common that define them as chairs instead of beanbags: Chairs have four legs, a back support part, a part to sit on, etc. There should be some similar consistent criteria for what constitutes a good explanation, and why you think this creates the necessary link between “Beautiful Earth” and “Supreme Creator”.

If you get home late and your boyfriend/girlfriend asks why you’re late, what would be a good explanation? Why is “I got stuck in traffic” better than “I was kidnapped by aliens”? We know the former is more believable, but why?

Well, you might say something like “traffic causes people to be late more than getting kidnapped by aliens does”. And that would be correct. But I argue that this isn’t enough to separate good explanations from bad explanations, and it isn’t enough to explain why your link from “Beautiful Earth” to “Supreme Being” is a strong or weak link.

So, if instead of getting home late, you got home early, and your boyfriend/girlfriend asks why you’re early, then saying “because I got stuck in traffic” doesn’t make sense. The stuck-in-traffic explanation is specialized for only making people late. But “I got kidnapped by aliens” works just as well for making someone late as it does for making someone early. Once you invoke aliens, then anything is possible. 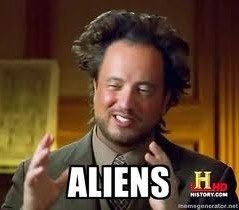 Let me repeat that last sentence more generally: Once you invoke [bad explanation], anything is possible.

Both qualities of good explanations I’ve enumerated here — a good explanation is more commonplace (e.g., “traffic causes people to be late more than getting kidnapped by aliens does”) and more specialized — follow directly from probability theory. So they’re not things I’ve just made up.

I think we know the answers to those questions.

Comments Off on How do you explain the mysterious beauty of this planet without referring to a supreme being?