The Fundamental Differences Between Science and Religion 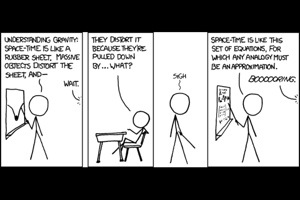 Here is a post outlining anthropologist Scott Atran’s research about the fundamental differences between science and religion, and why there can never be any reconciliation. To sum up Neil’s post:

Science aims to reduce the analogy to a factual description, where the terms of the analogy are finally specified, with no loose ends . . . . Science seeks to kill the metaphor, religion strives to keep it poetic.

Religion strives to keep the metaphor alive, and to keep it poetic and endlessly open to further elaboration and extrapolation. The metaphors of religion are never fully assimilated with factual and commonsensical beliefs.

2. The Place of Humanity (and Agency)

Humans are only incidental presences in the scientific universe but they are central to religion. Scientific understanding of how the universe works would remain the same if humans never were mentioned at all. But religion without a key role for humanity would make no sense.

3. Moral Absolutes versus Ever Changing Truths

A third difference that seems crucial to social life is that religions arc morally absolute, however conceptually flexible and open-textured, whereas science endlessly pursues ever changing truth by strict and rigid means. Religion establishes truth to provide moral and social stability. Science sacrifices surety to discover truth’s illusions. Religion abhors the competition for truth. Science can’t live without it.

4. Factual Knowledge has only a Support Role in Religion

Factual knowledge is not a principal aim of religion. It only plays a supporting role.

Only in the past decade has the Catholic Church reluctantly come to acknowledge the factual plausibility of the ideas of Copernicus, Galileo, and Darwin (Geitner, 1999). The earlier rejection of their theories stemmed from the challenges posed to a cosmic order unifying the moral and material worlds. . . . A lag time was necessary to refurbish and remake the moral and material connections in such a way that would permit faith in a unified cosmology to survive. (p. 278)

If this is the case then why does religion survive? I posted a comment on Neil’s blog post that sums it up.

Basically, we think in metaphor because our brains are inside of a body, so how we speak in every day conversation is overflowing with metaphor. As Neil wrote above, science aims to kill the metaphor and get to the true meaning while religion aims to keep it alive. There can be no reconciliation there.

In describing gravity, Science uses the metaphor of a bowling ball on a mattress. But Science knows this is incorrect. Religion would be content with the subjective beauty of the bowling ball metaphor and wouldn’t bother to correct you.

Religion also has human beings as the focal point of Creation, which is why god will always be hopelessly human. A truly alien god is a god that no one would worship. Well, almost no one 🙂

There’s of course, what I’ve concluded is the main reason for religion; at least, religion-like entities: groupthink. Religion seems to be a special case of the more general phenomenon of our brains being wired for tribal politics. It’s not so much that people believe in religions because they’re true, they believe in them because the group does. This makes sense of Dennett’s “belief in belief”, and why anthropologists and psychologists understand religion more than the so-called New Atheists:

The role of belief in religion is greatly overstated, as anthropologists have long known. In 1912, Émile Durkheim, one of the founders of modern social science, argued that religion arose as a way for social groups to experience themselves as groups. He thought that when people experienced themselves in social groups they felt bigger than themselves, better, more alive — and that they identified that aliveness as something supernatural. Religious ideas arose to make sense of this experience of being part of something greater. Durkheim thought that belief was more like a flag than a philosophical position: You don’t go to church because you believe in God; rather, you believe in God because you go to church.

I don’t think this is the whole story — that you believe in god because you go to church — but it probably accounts for a lot of it.

The New Atheists aren’t completely wrong about religion, though. The way you defeat religion is what differentiates the “New” atheists and the old ones: Saying that religion is not cool, or has no place in modern society. Those sorts of arguments — the same sort of social shaming that feminists use — are what will get people to fall away from religion. This is one of the reasons why “the Internet belongs to feminists and atheists (and pr0n)”; the most prolific Internet users are also the most likely to be atheists or non-religious due to the vast amount of social shaming that goes on there. I personally think that’s taking advantage of the dark arts, but what are ya gonna do. Facts change peoples opinion a lot less than being ostracized does.

One of the major differences between most other political groups and religion is that religious beliefs focus around “socializing” (I put that in scare quotes for a reason) with supernatural beings. Because the causes for religious belief are mainly cognitive/sociological, there are a lot sociological/psychological circumstances that increase religiosity, like high income inequality, loneliness, or feeling out of control (combined with baseline human psychology like hyperactive agency detection, promiscuous teleology [i.e. things have a purpose] and the just world fallacy). Which is probably one of the main reasons why minorities and women are more religious than men/people in relative power (indeed, women are more likely than men to say they are lonely).

So yeah. Not much else to add. Religion and science not only can’t get along, but shouldn’t get along because science should remain apolitical; there shouldn’t be any groupthink involved in scientific progress. Once you start doing that, you start moving away from authentic discovery and towards *backflip* GO SCIENCE *crowd cheers*

I once attended a panel on the topic, “Are science and religion compatible?” One of the women on the panel, a pagan, held forth interminably upon how she believed that the Earth had been created when a giant primordial cow was born into the primordial abyss, who licked a primordial god into existence, whose descendants killed a primordial giant and used its corpse to create the Earth, etc. The tale was long, and detailed, and more absurd than the Earth being supported on the back of a giant turtle. And the speaker clearly knew enough science to know this.

It finally occurred to me that this woman wasn’t trying to convince us or even convince herself. Her recitation of the creation story wasn’t about the creation of the world at all. Rather, by launching into a five-minute diatribe about the primordial cow, she was cheering for paganism, like holding up a banner at a football game. A banner saying “GO BLUES” isn’t a statement of fact, or an attempt to persuade; it doesn’t have to be convincing—it’s a cheer.

Posted by J. Quinton on May 30, 2013 in cognitive science, economics/sociology, religiosity