It’s Not A Tumor!

Really, though, I just wanted to use that “divide by zero” image 🙂

There’s a lot simpler way of demonstrating that something that can be used to equally explain everything in reality explains nothing. Why, “if you are equally good at explaining any outcome, you have zero knowledge”. This is summed up in the very, very simple equation P(E | H) + P(~E | H) = 100%.

Instead of using percentages, I think it would be easier to use money. Using the money analogy, your hypothesis only has 100 dollars to bet on each instance of the evidence, like you would place a certain amount of money on each planet in the solar system or something like that. Where does your hypothesis place most of its cash? Do you go all in on only one type of evidence or spread it evenly across all of it? 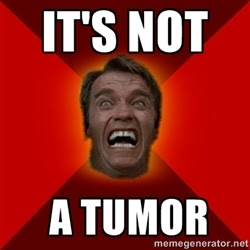 Anyway, in this case, P(E | H) is the probability of having a headache given that you have a tumor. Since the vast, vast majority of tumors cause headaches, the “it’s a tumor” hypothesis is going all-in in regards to P(E | H); effectively saying that tumors almost never don’t cause a headache, which is represented by P(~E | H). A tumor that doesn’t cause a headache would be a huge surprise, and depending on how much of our 100 bucks we place on P(E | H), we would place almost none of the 100 dollars on a tumor not causing a headache P(~E | H).

Some hypothesis where having a headache and not having a headache is no surprise would analogously be placing less money on both, and would not go to extremes like the “it’s a tumor” hypothesis does. They would distribute their 100 dollars more evenly between P(E | H) and P(~E | H). And this is why something that equally explains everything explains nothing.

If E were not some binary event, but an event with multiple possible outcomes, then something that is attempting to “not be surprised” by any event would start evenly spreading their 100 dollars across all possible outcomes. If there are 10,000 possible events/outcomes, then something that is attempting to explain everything equally would only be betting one cent out of 100 dollars on each particular outcome ( P(E1 | H), P(E2 | H), … P(E10,000 | H) ).

There isn’t any. With the Abrahamic god, there should be no surprises. As they say, “the Lord works in mysterious ways”. Because of the celebrated mysterious ways, we have no warrant for placing more money on one instance of the evidence to the exclusion of the other instances.

This would mean that the god hypothesis is spreading itself thin with its budget of 100 dollars. So for the solar system example, given that the Abrahamic god exists, and taking into account the limitations of the Abrahamic god (i.e. none), we could easily be living on Earth or Mercury or Neptune. The Abrahamic god could use perpetual miracles to keep us alive on any planet. So P(E | H) would be one planet, and P(~E | H) would be the other seven planets. The Abrahamic god would spread its money evenly across all planets, unless we can come up with a reason for the Abrahamic god to put most of its money on one planet to the exclusion of the others. But we have none, like I said, “mysterious ways…”. Whereas a limited god, or some other hypothesis that doesn’t allow for anything, would put most of its money on a planet that was in the Goldilocks Zone.

And indeed, if life was found on a planet within the Goldilocks Zone, then the hypothesis that put all of its money on that one planet would win the good payout, whereas another hypothesis that spreads itself across all planets would gain a negligible payout. Given equal prior probabilities, a Goldilocks Zone is evidence against the Abrahamic god, or any hypothesis that allows for anything, via the likelihood ratio.

What if there are a million possibilities that the Abrahamic god could explain, but some other hypothesis goes all-in on only one explanation? The hypothesis that goes all-in will get the huge payout, and the god hypothesis gets an even more negligible payout. Of course, this, again, assumes equal prior probabilities for both hypotheses. Yet in reality, the prior probability of god is extremely low to begin with. That is actually two strikes against the Abrahamic god.

The problem with religious thinking is that religious people never correctly apply the counterfactual. I’m probably using that word loosely, but yeah. P(E | H) is usually the focus when religious people attempt to use probabilistic thinking, but they never take into account P(~E | H), which might be described as the counterfactual. If they do think about the counterfactual, they usually don’t think that the “factual” and the counterfactual are related probability wise. In other words, they don’t think that P(E | H) has any relationship with P(~E | H) and because of that they unwittingly ascribe 99% to both. And since both terms are in reality added together, you end up being much greater than 100% when you have P(E | H) + P(~E | H), which is the probability version of dividing by zero.

So really, the probability equation P(E | H) + P(~E | H) = 100% succinctly explains why something that can be used to equally explain everything in reality explains nothing. To reiterate, if you are equally good at explaining any outcome (i.e. P(E | H) = P(~E | H) in the case of a binary event/evidence) then you have zero knowledge; if there are no surprises then you have zero knowledge. This doesn’t actually prove that the Abrahamic god doesn’t exist. It only says that the Abrahamic god isn’t a good explanation for something; that there are better explanations out there.

When you are attempting to explain something, always go all in. Probability favors the bold.

Comments Off on It’s Not A Tumor!